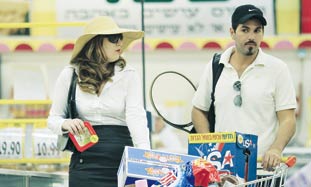 Earlier this year, Mahmoud al-Mabhouh, a Hamaas official, was assassinated in Dubai, presumably by Mossad agents who had forged British passports to carry out the mission.

Now an ad agency has produced a viral video for a discount supermarket chain, Almost Fre, parodying the surveillance footage recorded at the site of the assassination.


The ad itself will begin airing next week and will show footage of people dressed up as secret agents, wearing the costumes used by the Dubai team, walking around the store and picking out products that are on sale. One is a man wearing a tennis player outfit, another is a man in a business suit wearing a fake mustache and the third is a woman with a wide brimmed hat. Whenever one of the characters picks up an item, a red circle appears around it, parodying the circles picking out the agents in the surveillance videos.

The video is being released just in time for Passover grocery sales!  Looking forward to seeing the commercial.
Posted by William Levin at 3/23/2010