Raffi, Jess, Ahron Mohler, and me with a big wad of gum in my yap
Rav Shmuel put on another fine show at Sidewalk Café in the Lower East Side of Manhattan. You can hear some of his tunes on Myspace Music. After the cutie I was with ducked off into a corner to confront her ex-boyfriend (AWKWARD), I sat for a chat with Ahron Mohler--man on the Manhattan Jewish alternative music scene--and his friends Raffi and Jess. This post is really for the ladies who cannot resist a tsitsis-wearing Jewish bad boy with rugged good looks. Even my sister saw a photo of Ahron and said, "Wow, that is a really hot photo of you!"
Posted by Shabot 6000 at 3/31/2006 2 comments:

How I Told the Film Crew I Was Jewish

Camerman Doug Caswell, Soundman Doug Kay, and Producer/Director Jamie Kastner of Cave 7 Productions
Last week I was visited by three Canadians, and this time they were not here to make me take yet another survey about maple syrup. Actually, these fine fellows from Cave 7 Productions were in New York to interview local Jews for a new feature documentary, The Identity Project/ HOW I TOLD THE WORLD I WAS JEWISH, AND FOUND OUT WHAT IT FELT LIKE (working title). Producer and Director Jamie Kastner interviewed me in my apartment here in Park Slope, Brooklyn, asking questions about the new Jewish Renaissance, and how I identify with the movement. Being interviewed for film was a totally new experience for me, and I have to admit that I was a little camera shy. We talked about my approach to Judaism through cartoons--that was the easy part. We also spoke briefly about my ex-sweetheart, who was a significant source of inspiration for my cartoons, and that was a bit tougher. I am humbled to be considered even just a minor player in the New Jewish movement, and even if my bit gets cut from the film, I am honored to have had the opportunity to meet with Kastner and his crew.

Cave 7 Productions is a Toronto-based boutique production company specializing in unique documentary films made for international audiences. Though a relatively new company, it has received considerable acclaim and forged solid relationships with a range of prestigious broadcasters around the world.

Currently in production: The Identity Project/ HOW I TOLD THE WORLD I WAS JEWISH, AND FOUND OUT WHAT IT FELT LIKE (working title), a feature documentary being made for BBC's Oscar-winning series Storyville, Sundance Channel (US) , TVOntario, CHUM, Canal D, SCN (Canada), YLE Finland, TV2 Denmark, SBS Australia, and Noga 8 Israel.

President of Cave 7 Productions, Jamie Kastner is producer/director of all the company's key projects to date. In addition, he recently served as writer/director and songwriter for Discovery Channel's Strange Tales of the Flesh (Barna Alper Productions) and co-writer for Comedy Gold (Insight Productions) a four-hour documentary for CBC on the history of comedy. For three seasons he directed and hosted a regular pop culture segment, kastnerkulture, on CBC-Newsworld's play. He has directed extensively for various current affairs and cultural programs at CBC, TVOntario and MuchMusic including Undercurrents, Studio 2, Big Life with Daniel Richler and On The Arts with Laurie Brown. He hosted and produced Mr. Jones a live pop culture program on TVO and was associate producer on two CBC-Witness documentaries: Chickens are People Too and Somebody's Gotta Do It. He has also worked extensively as a print journalist with the Toronto Globe and Mail, Toronto Star, Toronto Sun, NOW, eye, and Saturday Night magazines, and is currently a regular contributor to Canada's two national newspapers, The Globe and Mail and The National Post. He has also written and directed for theatre.

I also think he looks like South Park's Matt Stone.

Following fast on the success of The Million Dollar Homepage, Aaron Gurland has started a new pixel advertisement web site specifically for Jewish companies and organizations, The Jewish Homepage.

You can read more about how the system works, and if you can spare the 18 cents per pixel, you might as well buy a block and own a piece of Jewish Internet history!
Posted by Shabot 6000 at 3/27/2006 2 comments:

Queen Esther and Ninja Esther
Happy Purim! I just got back from attending the Second Annual Grateful Yid Purim Bash, hosted by Chabad of Prospect Heights at Southpaw here in Park Slope, Brooklyn. Featured bands were Juez, Asefa, and Rashanim. As always, these musicians gave a fantastic performance, and had the place hopping. The great thing about this show was that revelers of all ages and streams attended, from wee tots to respected rebbes, black hats to Jewfros.

She's young and beautiful, and my family adore her. Her name is Lola, and she is my new baby niece!

I finally got to meet Lola this past weekend, she is just three weeks old now. I spent most of my visit hovering over her stroller, watching her sleep. And I felt honored to hold her and have her fall asleep in my arms. I'm her Uncle Willy!

Bangitout.com lists my new animated cartoon, Shushan Shabot, at number 6 in the Top Ten Purim Viral Videos. Interestingly, Shushan Shabot is the only video in the list that has anything to do with Purim. I guess they needed to list the other 9, though, or it would be a very short list.

Even though the other videos were not about Purim, I did like the Borat clip, Hunting the Jew.
Posted by Shabot 6000 at 3/13/2006 No comments:

Susanne, Derek, Doree, me, and Ben at the Frumster focus group
I just got back from attending a Frumster focus group and dinner, hosted at Mr. Broadway in Manhattan. Not only am I a member of the service, but I also collaborated with Frumster on the "We Need A Mensch" cartoon campaign to celebrate their 500th marriage. So I was particularly interested in participating in their effort to improve the service.

The name Frumster.com itself was a topic of discussion. For some, the term frum connotes ultra-orthodoxy or piety, and Frumster staff were concerned that the name may be turning off non-Orthodox Jews from even visiting the site, (FYI, "Traditional" is a term that Frumster formerly used to describe Jews of non-Orthodox background). I personally like the name "Frumster", and don't think they should worry about it scaring potential clients. Frumster recently announced having opened its gates to us Traditional Jews, (though non-Orthodox members were welcomed into the fold over a year ago) and since then, signups have grown exponentially.

We also talked about the invisible rift between some Orthodox and Traditional Jews on Frumster.com. Many open-minded Jews are willing to date members of the "opposite stream", while others are flat out offended by the prospect. It sure is difficult to accommodate the needs of everyone in an online dating community of such varied philosophies. Frumster's Director of Marketing, Derek, explained that every time a new variable is added to the system, in an attempt to please some and protect others, it becomes a programming and logistical nightmare!

The neon lights are shining bright on Mr. Broadway

Frumster's Derek and me
Besides the brainstorming, we were also treated to a bountiful dinner, and it was fun to actually meet other members of the Frumster community ... which is a first for me, despite being a "PremActive®" member! It's true, I am a victim of Ortho-Traditional discrimination: Fear of no black hat. It was the catalyst that ignited my Shabot comic strip in the first place.

With Purim just one week away, I am pleased to release my new animated cartoon short, "Shushan Shabot".

I put a lot of work into this one, so I hope you enjoy it as much as I enjoyed creating it! I produced all original music for this project, as well as all the voiceovers, illustrations, and animation. 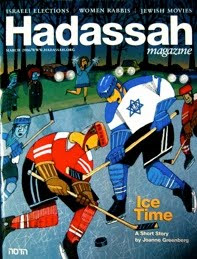 Shabot 6000 has been mentioned in the March 2006 issue of Hadassah Magazine! See Brief Reviews on page 66, for a short and sweet write-up in the Web Sighting section.