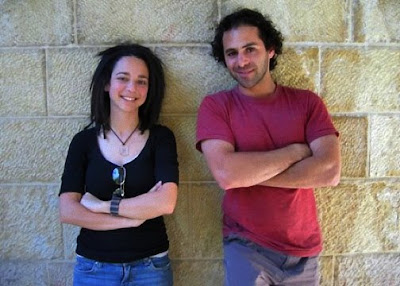 While attending the ROI120 2008 Summit in Jerusalem, I had the privilege of being interviewed for a podcast with creative partner Michelle Citrin for the JTA, in a piece titled Rosh Hashanah Girl (and Guy) Come to Israel; as well as a one-on-one interview about the origin of my Shabot 6000 comic strip with the Jerusalem Post!


The weekly comic strip, which is updated anew right before Shabbat and has nearly 200 comics in its four-year archive, debates questions on - and routinely pokes fun at - Jewish religious observances and traditions through a contemporary 21st-century lens.

"The robot and the pious Jew represent my own struggle with Jewish identity and religion," Levin said.

"It is my self-exploration with Judaism."

Read the rest of the article, The Shabbos Goy That Wouldn't, by Etgar Lefkovits, archived locally from the Arts & Culture section of the July 1, 2008 issue of The Jerusalem Post.

And hear me stammer nervously in the JTA Podcast.
Posted by William Levin at 7/01/2008

Good articles and you both sound adorable in the podcast. The nervous stammering is charming.